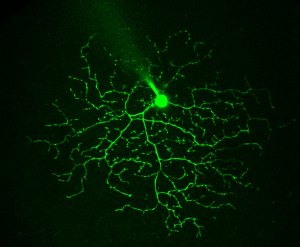 Light is converted into electrical signals by specialized cells in the retina called photoreceptors. This conversion process, termed phototransduction, is relatively slow, taking around a tenth of a second. Although this might not sound like a long time, it is enough for a tennis ball to have travelled 3-4 meters when served by a professional.
Despite this, we do not experience moving objects being delayed, which indicates that moving objects are somehow processed more rapidly. An example of how moving objects are processed differently to static objects can be seen in the flash-lag illusion. This apparent faster processing of moving objects begins in the eye.

Selective disruption of inhibition in a single retinal ganglion cell 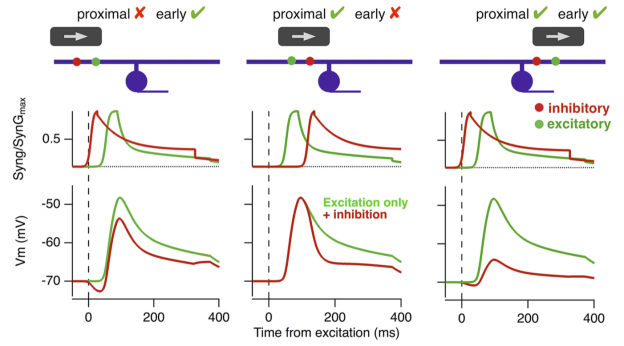 Computational model showing the effect of inhibition for a moving stimulus

The project described how the non-linear interaction of excitatory and inhibitory synapses, within ganglion cell dendrites, enables encoding of the actual position of a moving object instead of its delayed representation. The fact that retinal ganglion cells receive an excess of inhibitory inputs is a long-observed feature of retinal wiring, and a role for this can now be understood in terms of providing the mechanism of motion anticipation. The full paper can be read here

For informal enquiries about sponsorship for externally-funded Postdoctoral Fellowships or PhD Studentships to work in our lab please contact: j.johnston@leeds.ac.uk

New paper out in Neuron, see the summary here